All roads lead to the T1 PRIMA TRUCK RACING CHAMPIONSHIP 2017 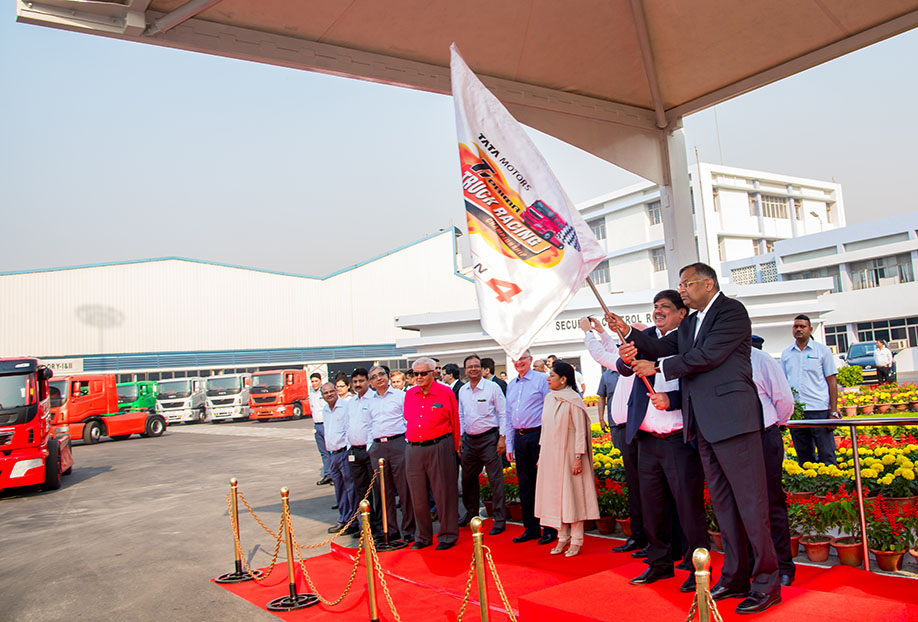 Founder’s Day is celebrated on March 03 across the Tata Group to memorialise the life of the Tata group Founder Jamsetji Nusserwanji Tata and his contribution to India. The Founder of the Tata group with his powerful vision inspired the steel and power industries in India, set the foundation for technical education, and helped the country leapfrog from backwardness to the ranks of industrialised nations.

Considered as the F1 of Truck Racing in India, the T1 PRIMA TRUCK RACING CHAMPIONSHIP is a grand spectacle of Tata PRIMA race trucks battling it out against each other. Having kicked-off TRP 2.0, under a new theme of ‘Junoon-e-Trucking’, Season 4 will once again see Indian truck drivers compete against each other for ultimate glory.

TRP 2.0 is one of the country’s most comprehensive motorsports driver training and selection programs conceptualized and conducted by Tata Motors. Through TRP, Tata Motors is training Indian drivers to excel in the sport and in their respective professions.

The Tata 603 acre Jamshedpur plant has been instilling transformation in the Indian commercial vehicles space while setting benchmarks through the introduction of class-leading trucks, with state of the art technologies matching global standards. Tata Motors’ Jamshedpur plant hosts state-of-the-art equipment and assembly lines which are ready to produce one truck every five minutes. The Jamshedpur truck complex is the hub for production of the Prima trucks. With a production capacity of one lakh units, Jamshedpur factory assembles over 200 models comprising of multi-axle trucks, tractor-trailers, tippers, mixers and special application vehicles targeting civilian and defence segments, with the latest being the T1 Prima race truck.

About the Tata Prima:

The award-winning World Truck i.e. PRIMA is equipped with strong aggregates and a robust chassis frame and suspension. The Tata PRIMA range meets the highest operating standards under extreme conditions, thanks to outstanding material and build quality, comfort, driving dynamics, offering customers with of lowest cost of operations. The Tata PRIMA range has set up new benchmarks in the performance and design of a next-generation commercial vehicle, based on superior technology, optimum power, fuel efficiency and safety.

Tata Motors Limited is India’s largest automobile company, with consolidated revenues of INR 2,75,561 crores (USD 41.6 billion) in 2015-16. Through subsidiaries and associate companies, Tata Motors has operations in the UK, South Korea, Thailand, South Africa and Indonesia. Among them is Jaguar Land Rover, the business comprising the two iconic British brands. It also has an industrial joint venture with Fiat in India. With over 9 million Tata vehicles plying in India, Tata Motors is the country’s market leader in commercial vehicles and among the top in passenger vehicles. Tata cars, buses and trucks are being marketed in several countries in Europe, Africa, the Middle East, South Asia, South East Asia, South America, Australia, CIS and Russia.

Tatamotors14 February, 2018
You favourite #LevelNex rockstars p a r i k r a m a will play LIVE soon from the TATA pavillion Hall No. 14, 3 PM onward during #AutoExpo2018. Keep #RollingWithNexon, only on twitter, to know more. Rolling Stone India http://bit.ly/2EpMoqI

Tatamotors14 February, 2018
A rocking #LevelNex Valentine's Day indeed! Watch Parikrama perform LIVE at 3 PM at the Tata Pavillion Hall no. 14 during the #AutoExpo2018. Keep #RollingWithNexon to know more! Exclusively on Twitter. http://bit.ly/2F3Jysw
#LoveForYodha We asked ladies "What qualities of #TataYodha would they like to see in their Valentine?" We got a fe… https://t.co/hrSbY726IC
@Tatamotors14 February, 2018

Tatamotors14 February, 2018
#LoveForYodha We asked ladies "What qualities of #TataYodha would they like to see in their Valentine?" We got a few reactions from guys too! #AutoExpo2018 #ValentinesDay

Tatamotors13 February, 2018
We got some amazing entries from you all for #TrucksAreCool! Here are the ones we absolutely loved. #AutoExpo2018 #ConnectingAspirations

Tatamotors13 February, 2018
Second last day to get the #LevelNex experience of the Tata Nexon. Now on display at the #AutoExpo2018

Tatamotors13 February, 2018
Tiago EV and Tigor EV's Harman™ infotainment system, with 8 speakers, ensures you're grooving all the way to your destination. #ItsFantastico #TigorStyleBack